For this very first post, we thought about what can be called the very first work of the contemporary art of the XX century, Fountain by Marcel Duchamp. The artist presented this work to a competition jury, but under a pseudonym: R. Mutt. This is the first time that an object that was already existing is presented as an actual work of art, without taking into account the ability of the artist, but just his idea. That object was called by the artist a “readymade”. This is the beginning of the conceptual art, meaning that the concept, the idea, is what makes a work a work of art.

Why it was necessary to make this change in the contemporary art field? Actually, with the pre-existing avant-guarde movements, it was already common to associate a message to a work of art: you can think of Futurists (especially the ones of the “First Futurism”, 1909-1916), for example, who wanted to represent technology, speed, war, action, in a period when the First World War was coming. The idea was already the most important thing of a work of art. The step further was to make the idea the only important thing of a work of art. Duchamp took that step.

Marcel Duchamp started his career taking part in the Cubism exhibitions, but there was something in cubist painting that Duchamp wanted to include: movement. The introduction of movement (with different strategies, see Nude Descending a Staircase, No. 2) in his paintings had as a result his exclusion from Cubism. Then, Duchamp could experiment with whatever he wanted, without limits, and his works of art became a reflection on art itself.

Fountain is the ultimate result of this reflection, decontructing the meaning of art and the tools to make art. Duchamp presented the work to an art competition under the pseudonym of  Richard Mutt, R. Mutt, because he was taking part in the jury of that competition and he wasn’t allowed to participate as an artist (there are many interpretations of the name R. Mutt, here you can see expamples)  But the artwork wasn’t appreciated at the time (as every revolutionary thing), and it was re-discovered in the 60s, when Duchamp made replicas of his works: that is all we have right now!

To see similar works and readymades, and to know more about it: http://www.tate.org.uk/art/art-terms/r/readymade 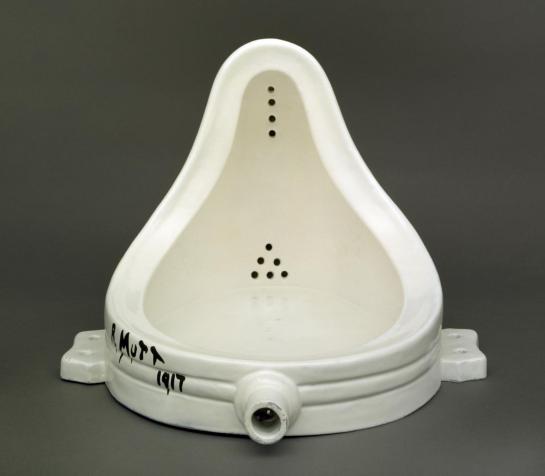