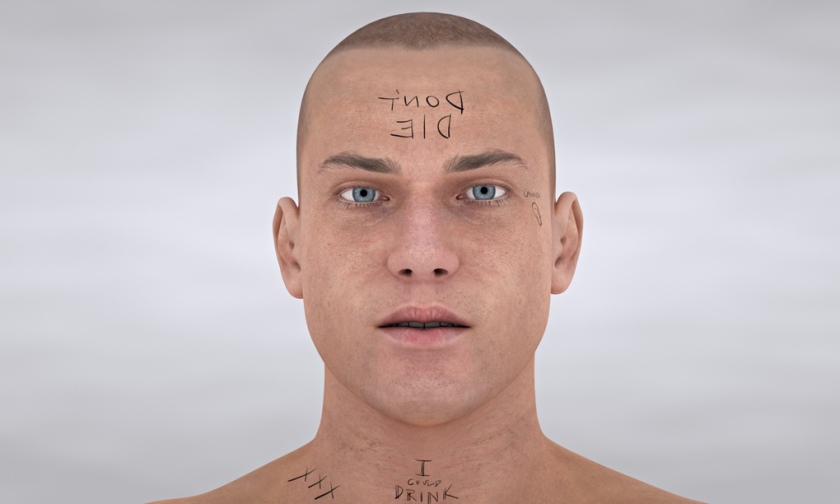 Ed Atkins‘ work puts together video art and poetry, thanks to the realization of animated videos in which there is always a voice over. In some parts of the artworks, that voice recites poetic verses written by himself. The protagonists of his video are avatar, that are often alone and speak with the observer. For example, in the image above you can see a frame from Ribbons (2014), which is, in our opinion, one of the most powerful works of the artist: it depicts the struggles everyone of us goes through, exagerating their violence to make the danger clear. The man in the video smokes, drinks, has a void in his eyes and speaks about life with the artist’s voice and verses.

He wants to comunicate with his works the loneliness and the violence that are unconsciously accepted on a daily basis. Safe Conduct is a perfect example of this aspect: it narrates all the security processes we all experience when walking in an airport. The violence represented here is the violation of the personal intimacy of the individuals. Even the display of the work wants to put the observer in a position of danger, simulating the screens found in the airports. This creates a vulnerability in the spectators, who realize that that violence can happen (and is happening) also to them. As Andrew Russeth, from TheNewYorker, says about Ed Atkins’ work, “it charts how people can “melt,” almost without noticing it—into new moods or forms, or into each other. He likes to talk about the way in which labor is hidden behind technology,”.

To create those videos, Ed Atkins uses the same technology that is used, for example, by Snapchat, when it recognises the position of your face to make you play with flowers or dog tongues. But he does not use that technology for playing or for entertainment, he uses it to create a sort of alienation in the spectators: when they watch the video, they can see a man moving, and then they realize that is not a man what they see. It’s an avatar. It’s almost a man, but it has been eaten by technology.

In other words, we can say that Ed Atkins’ work is a pure reflection on modern technology and on a tragic vision of it, to make the struggle we all unconsciously accept more understandable to us all.

Bibliography:
HARBISON Isobel, ‘Ed Atkins’, Frieze, London, no.139, May 2011.
RUSSETH Andrew (May 20, 2016). An Artist Who Explores the Deep Creepiness of Facial-Recognition Technology. The New Yorker

Here you can find fragments of the original work.