A new week of contemporary artworks with us is starting! Today we speak about Shirin Neshat, an iranian artist who is living in New York.
Here we show some pictures, but the series counts many more! (To buy the book that collects them all: https://books.google.it/books/about/Women_of_Allah.html…)

Shirin Neshat was born in Iran, but she moved to Los Angeles for her studies a few years later. When she came back to Iran, in 1990, the situation was much worst than what she expected it to be. From this experience comes this photography series: she poses as a model in the chador (the long black veil). The few body parts left naked are covered with poetry verses from iranian feminist poetesses.

As you all can see, the kind of feminism that Shirin Neshat is advocating is not the same feminism we think of in the West world: this opens a new unexplored way to think of it. In fact, there are many islamic women who don’t see the vail as an imposition by men, but as a personal choice, and they fight for the freedom of making that choice without being judged. Obviously the matter of the islamic feminism is much more complicated than that, so we suggest to read more about it (for example: AHMED Leila (1992). Women and gender in Islam: historical roots of a modern debate. New Haven, Connecticut: Yale University Press).

Moreover, in her photos we can often see some guns or weapons: this symbolises art used as a tool to defeat the patriarchy. What we can see in these pictures is an apparent calm simmetry, but actually we can feel the revolution behind it. As the artist said, “every image, every woman’s submissive gaze, suggests a far more complex and paradoxical reality behind the surface.” The first image above is called Rebellious silence, and it resembles well this concept.

Shirin Neshat is a performer, a videoartist and an activist. 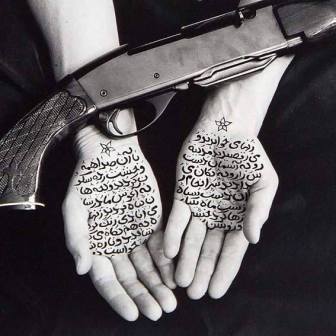