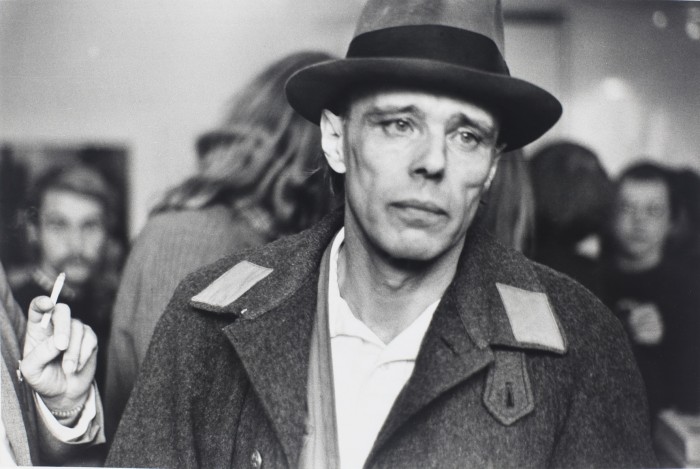 Joseph Beuys was a very particular artist with a strong bond with nature. Many of his works are made of felt, because it is a material he was very obsessed with, due to its resistance qualities. In fact, he had some traumatic experience that influenced his art a lot: in 1943, he was militating in the german aviation in the Second World War, and his plane was shot down. He was then rescued by nomads in the Crimea, and with them he learned their medicine and the special bond they had with nature. He was then called “the shaman artist”. The artist said “I don’t use shamanism to refer to death, but vice versa – through shamanism, I refer to the fatal character of the times we live in. But at the same time I also point out that the fatal character of the present can be overcome in the future.”

To play this performance, Beuys was taken from the airport by an ambulance and brought to the gallery, as he didn’t want to touch the american soil.
He went in the gallery room with just a stick and a felt cover, and stayed there with a coyote for eight hours a day. At first, the coyote was aggressive with the artist, but then he managed to domesticate the animal. About this performance, Beuys said: “I wanted to isolate myself, insulate myself, see nothing of America other than the coyote.”

This symbolises the possible union between men and nature, a union that the artist firmly believe is necessary to be restored. Another example of this feeling by the artist was the artwork titled 7000 Oaks – City Forestation Instead of City Administration, during Documenta 7 in 1982. This resembles the idea of “social sculpture”, a wok of art created by people: the artist invited Documenta visitors to buy a stone to allow an oak to be planted. He reached the symbolic number of 7000 oaks planted.
In this case, although the real work of art is the actual performance, that can never be reproduced exactly in the same way, we still have photographs and a video, available on vimeo: https://vimeo.com/5904032.
– M.C.