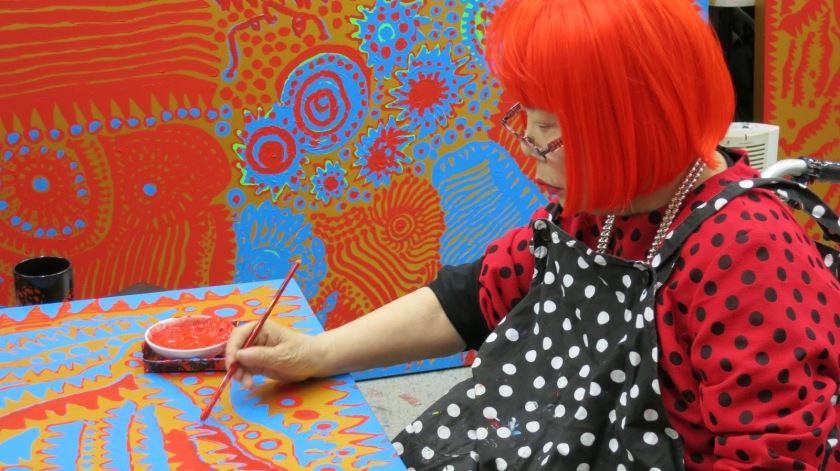 Today we speak about the queen of the dots: Yayoi Kusama. She’s one of the most famous artists in the world and she’s born in Japan on 1929. If we want to understand her works we should dig into Kusama’s past. Since she was a child she suffered from a mental disease. She said: “My art originates from hallucinations only I can see. I translate the hallucinations and obsessional images that plague me into sculptures and paintings. All my works in pastels are the products of obsessional neurosis and are therefore inextricably connected to my disease. I create pieces even when I don’t see hallucinations, though”.

During a crisis at the age of 12, the red flower pattern of a tablecloth will begin to populate her universe obsessively and she will repeat it over and over. “A polka-dot has the form of the sun, which is a symbol of the energy of the whole world and our living life, and also the form of the moon, which is calm. Round, soft, colourful, senseless and unknowing. Polka-dots can’t stay alone; like the communicative life of people, two or three polka-dots become movement… Polka-dots are a way to infinity”.

Pumpkin is an important subject of Kusama’s work, with which she have an emotional connection since childhood. During the World War II, Japan’s food supplies were generally interrupted, the city of Matsumoto was relatively untouched by the conflict and local products were plentiful. The family business was to sold wholesale, and the Kusama warehouse was always full of pumpkins. Although consumed that vegetable until feeling nauseous, Kusama has maintained an attachment to the pumpkin and its irregular bulb shape.

Obviously she couldn’t miss the dot motive even on the pumpkin, there are lots of Kusama’s pumpkins around the world and collected in the best museums. The pumpkin on the image below was created on 2015 and situated in Naoshima island in Japan.

In addition to the art scene, Yayoi Kusama’s imagination has attracted the fashion world, Kusama collaborated with Marc Jacobs, creating a fashion collection of huge and colorful clothes for Louis Vuitton.

To see her portfolio:
http://www.yayoi-kusama.jp/