We are at the end of the #BerlinSeries, and we want to finish it with an artwork whose meaning is our hope for the future to come.

In fact, this enormous sculpture (30 metres high) is a symbol of reunification, unity, strength. It represents three men joining in the center, but these men re made of holes, that symbolize the molecules each of us is made of.

The artist himself says that this idea of the molecules was fascinating him because “even though we appear to be quite solid, we are in fact composed of a molecule structure which, in itself is mostly composed of water and air. For me, this hundred-foot tall aluminum sculpture composed of three figures meeting in the center, not only refers to the lightness inside our own solid bodies, but also the figures joining in the center, refer to the molecules of all human beings coming together to create our existence.”

This is particularly important if we associate it with the position it is in: it is placed next to the Spree River, and it seems almost fluctuating on the water surface. It is well visible from the bricks bridge next to the East Side Gallery (you don’t know what it is? We talked about it here!), but actually it is so big that it is quite visible from many places around the river. The river was a natural separation between the East Side and the West Side of Berlin, and the artist wanted to overcome this limit with a symbol of unification.

To see the artist’s other works, you can find his website here. 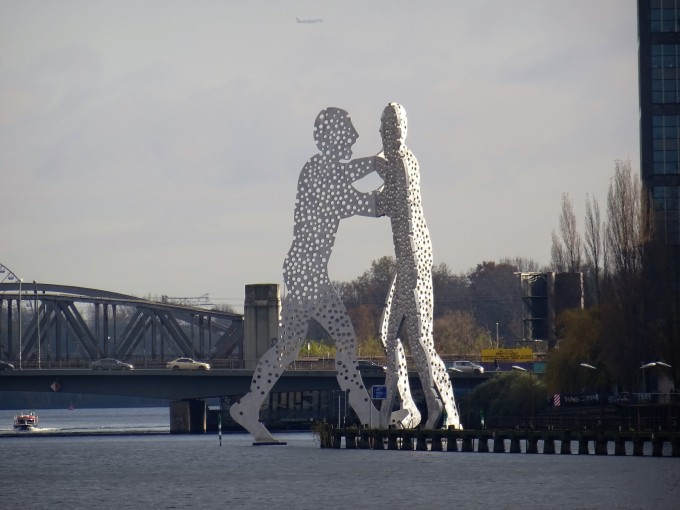