James Turrell is a famous artist, and he works with lights creating beautiful architectures.

This works was created as a site-specific artwork for the hall of the Guggenheim Museum in New York.

The main idea of Turrell is to play with the optical illusions of light, in order to make it seem almost material. His artworks, in fact, create a whole new space, that is meant to be the ideal meditation place for the visitors. The light is supposed to provoke emotional reactions in the viewer, making the work a real experience. Aten Reign was created specifically for the Guggenheim Museum in New York, and it takes its inspiration from the rotunda of Frank Lloyd Wright’s iconic building, but the artist converted it in a whole new space. The viewer is invited to get lost in it, finding a new dimension.

The structure of the work is descripted in the following way by the curators: “In Aten Reign, daylight from the museum’s oculus streams down to light the deepest layer of a massive assembly suspended from the ceiling. Using a series of interlocking cones lined with LED fixtures, the installation surrounds this core of daylight with five elliptical rings of shifting, colored light that echo the banded pattern of the museum’s ramps. As is typical of Turrell’s work, the apparatus that creates the effect is mostly hidden from view.” 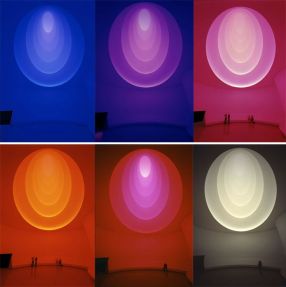 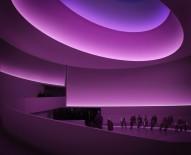 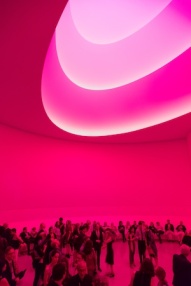