Lokking at this photograph, it may not tell you anything. You cannot even understand if we are looking at a macro picture or a micro picture. To fully understand this artwork is necessary to know a little bit of a background.

This is a photo of desert land in Kuwait, taken six months after the end of the first Gulf War, and, as the title suggests, it is part of a series.

So now we know that it is a macro picture, but this ambiguous perspective about the dicotomy between macro and micro levels remains important: when we see wars, Earth damaging, or even dead people, it all seems so far away, so big, so unimmaginable. The fact of being able to see it in a micro level brings it so much closer to us.

Sophie Ristelhueber was always interested in the damages of war, the ruins that war brings with itself. Moreover, during those years the aereal archeology was gaining a lot of interest, and she used it to investigate the situation of the lands from an unusual perspective.

Another series of her is called Every one, done in 1994, is collecting pictures of scars on unnamed patients in a Parisian hospital. The analogy between this series and the Fait series is clear: the signs on Earth becomes scars, Earth becomes human, and the macro and micro levels come back again.

This analogy makes the Fait series conceptual (because it is difficult to understand what it represents without explaining it) but very real at the same time.

You will find other pictures of her in the slideshow down below. 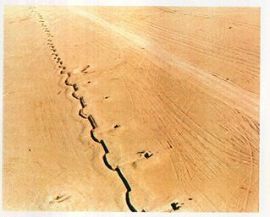