Norman Rockwell (1894-1978) is one of the best known and loved American illustrators of the twentieth century. Known for his commercial paintings, for more than six decades he brought to life more than 4,000 original artworks, painting humans and everyday life with his subtle and talented eye.

THE CRITICS
Despite his broad popular success and incredible skills, Rockwell’s work has often been dismissed by art critics: because of his beautiful but glossy and idealised representation of the American culture, due also to his long-running collaboration with the ultra-conservative magazine Saturday Evening Post (321 covers!), he was not considered a “serious painter”. Rockwell himself said that the America he portrayed was the country he hoped it could be, “more escapist than realist”. He also always referred to himself as an illustrator or commercial artist.

A NEW CONSCIOUSNESS
But thinking of Rockwell as a “brilliant technique put to banal use”, as said by writer Vladimir Nabokov, is totally wrong. During the 60’s he gained a new consciousness, severed his long-standing relationship with the Post (1963), started a collaboration with Look magazine. His first cover for them is The Problem We All Live With (1964), focused on the Civil Rights movement: a radical change.

“There was a change in the thought climate in America brought on by scientific advance, the atom bomb, two world wars, and Mr. Freud and psychology… Now I am wildly excited about painting contemporary subjects… pictures about civil rights, astronauts, Peace Corps, poverty programmes. It is wonderful.”

TRIPLE SELF-PORTRAIT
Triple Self-Portrait (1960) is what happen when a brilliant and modest artist with a sense of humor is asked to do a self-portrait for the cover of his autobiography.

As a self-portrait is an opportunity for the artist to reveal something about himself, Rockwell shows himself reflected (in the mirror) through the distorting lens of his own perception. Three images of himself placed in some illustrious company -Dürer, Rembrandt, Van Gogh, Picasso-, as he admitted of being influenced by both classic and modern fine arts masters. The helmet is a reminder to himself not to be taken in by appearances. He bought it in a Paris antique shop, thinking it was the headdress of an ancient Greek or Roman soldier, only to realise later that all French firemen wore those helmets. The artist’s signature is part of the composition, on the uncompleted canvas.

It’s one of the most iconic -and respectfully reproduced as a parody- self portraits in American art. 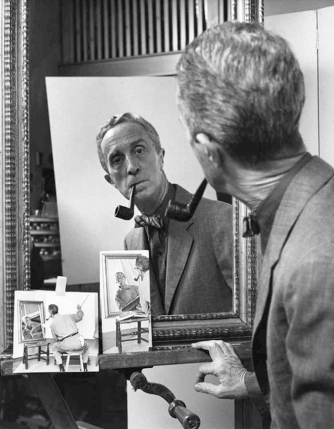