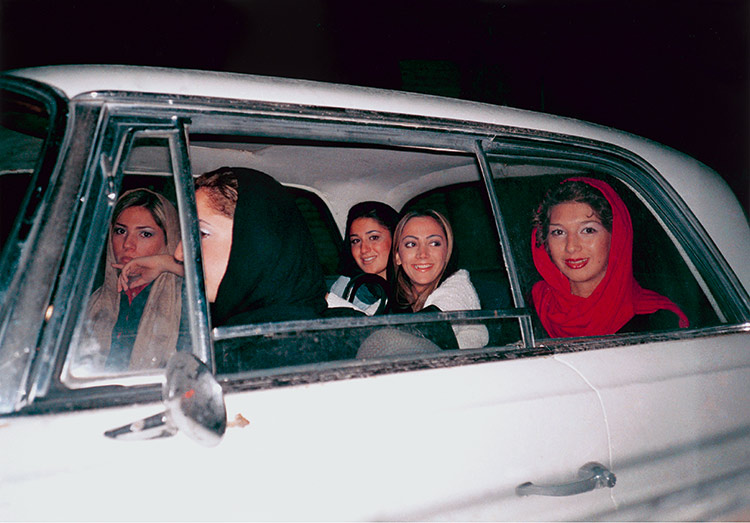 Shirin Aliabadi is an Iranian artist, coming from Teheran. She concentrates on the differences and similarities between the Iranian world and the Western society, with a particular focus on women.

Aliabadi studied in Paris, so she has a clear view on both ways of living. We already spoke about an Iranian artist with a similar background and similar interests (and the same name!), you can read about her here.

In this work, a series of four photographs depicting girls having fun while heading to parties in Teheran, we can see a different image than the stereotype we are used to. The girls here are laughing, the hijabs that they have to wear are almost a fashion accessory, they have make up on and they are driving cars. The artist was able to take a picture of these women while being stuck in a traffic jam, they are not posing, and the photographs are not made up by the artist.

“In the first years of the Islamic republic the country isolated itself to extremes and was also involved in the first Gulf War with Iraq. But the social climate became slightly more liberal with the presidency of Mohammad Chātami in the 1990s. Parallel to this, a flood of images and information has streamed into the state of God via satellite television and Internet: western ideas and lifestyles promise alternatives to the rigid ideology of the regime.” (source: ArtMag).

The contradiction between what we think Iran is and what it really is (with many more steps to make though…) is really evident in this series: this demonstrates how we are full of stereotypes even if we don’t think so.

On the other hand we have to keep in mind that the situation depicted by the artist is quite unusual for Iranian people: this can happen only in a big city like Teheran, with a more globalized environment and bigger opportunities. It can be a starting point for a deeper reflection on the differences between the cities and the coutrysides and how they affect people.