Reiner Ruthenbeck can be associated mainly to Minimal Art, but this is kind of reductive. He stays in the middle between Minimal Art and Conceptual Art, because his simple shapes hide often a deeper meaning.

Ruthenbeck began his career as a photographer from 1956 to 1962. In 1962 he was accepted by Joseph Beuys onto his course at the Kunstakademie Düsseldorf. While there, Ruthenbeck very quickly developed an aesthetic style and a set of concerns that, although influenced in part by Beuys and the interest among many of the Kunstakademie in Arte Povera and Minimalism, were also distinct from them in a rigorous commitment to exploring geometric shapes and forms.

An example of what I am saying is the series of Ash heaps (called Aschenhaufen in his original language, but it is difficult enough to decide to omit it), that he created from 1968 to 1972. The shapes are minimal, ordered, and they blend well with the surrounding space (these are the main characteristics of Minimalism), but they have something that recalls the Arte Povera and the Conceptual Art as well.

The Ash heaps, are Ruthenbeck’s most famous series, and below you can see some examples. They were included in Harald Szeemann’s exhibition When Attitudes Becomes Form, one of the most important exhibitions of all times! They are made of ash and dust, arranged to be similar to cones, they are pure material. But this material, made of thousands of different parts, is fragile and it seems to be destroyable in two seconds: to make all the parts come together in a cone, an internal wire structure has to sustain them. This means that the fragility of the installation is just an illusion, a paradox.

Moreover, the ashes and the dust that form the cone are a direct reference to the mid-20th century Germany, especially to the industrial pollution of the Ruhr area, where Ruthenbeck came from. 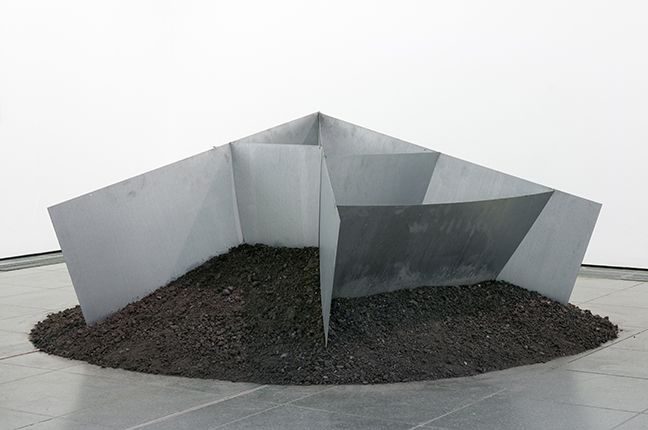